When the Le Creuset Star Wars collection was announced earlier this year with a dramatic video, I thought it was a joke, or an article from The Onion. But it wasn’t. It’s really a thing. And I want that Han Solo Carbonite Roaster real, real bad. (What food-loving Star Wars fan wouldn’t?) 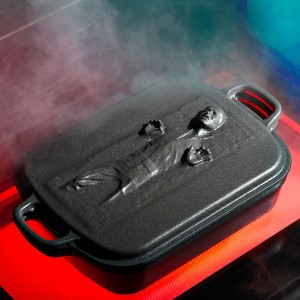 But did I mark my calendar for the release date? Reader, I did not. Because apparently I’m a fool.

Yesterday, embarrassingly late, I embarked on my mission to acquire said roaster. I started on Le Creuset’s website, but my efforts there were doomed.

I started calling stores and learned that the Star Wars line was only released to Williams Sonoma. So I went to their website. I was immediately hit with a pop-up offering me 15% off my first purchase with signup. Since the roasting pan of my desires costs as much as a shitty used car, I jumped on this, even though it made me also sign up for text marketing messages. I do know how to unsubscribe, however, and figured this was worth it for the discount.

I found the roaster. I added it to the cart. I almost, almost clicked “complete purchase” but at the last second I saw this:

Don’t get me wrong: I want this bad boy for myself—I ache for it—but my intent was to get it as a Christmas gift for someone who shall not be named in this post (but who is the geekiest, nerdiest, absolute best little brother anyone ever had). So obviously, February Will. Not. Do. Therefore I have reverted to pre-internet tactics: I’m calling every damn store in the country to see if anyone has one left on their shelves.

Meanwhile, Williams Sonoma’s marketing machine was cranking up. A half hour after I signed up for their marketing blasts, I got this text: 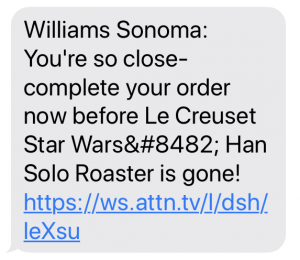 Let’s call &#8482; their Mistake #2. This is HTML code for the trademark symbol (they wanted “Star Wars™”). Using it here means the marketing team hasn’t done their due diligence on how this is going to render.

The use of a hyphen instead of an em dash (not obvious on iPhone but clear in Messages) can be Mistake #2a since most people wouldn’t notice it. (But don’t you want your stuff to be perfect? Really?)

So, okay. I’m crying myself to sleep on my big pillow about not being able to see my brother’s face when he unwraps this insane roasting pan on Christmas Morning. I’m making my phone calls. And then this morning, to add insult to injury, I get my first marketing email from Williams Sonoma. Thankfully, they weren’t trying (again) to sell me a product they don’t have in stock. (I was glad, but this is actually a huge miss, which we’ll call Mistake #3. They already know what I want to buy; they should definitely be showing me something similar in this email. They’re not yet out of the Darth Vader casserole, for example.) Instead, this was just your typical RM email. Typical for 2010, that is.

Mistake #4, and this one is huge. The entire body of the email is comprised of images. 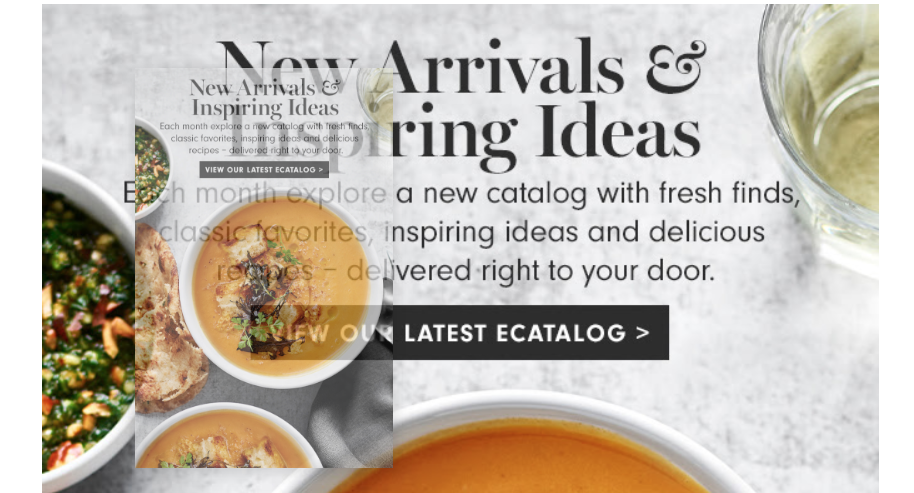 I happen to have images turned on, but many users don’t. In their article “Why You Shouldn’t Send Image-Only Emails,” Litmus says that as many as 43% of Gmail users view emails with images turned off.  And that’s just part of the problem. I immediately wondered how this image would render on mobile, so I pulled up the email on my phone.

Eventually, the image began to load.

Is a mobile user really going to wait for that? We all know the answer. Litmus pulls exactly zero punches in their advice:

Next is this gem:

You’re going to deliver your ecatalog (wtf?) right to my door? Granted, when I click through I arrive at a page that allows me to order a print catalog, which presumably will in fact be sent to my door, or explore the online catalog.

Which brings me to Mistake #5. The website calls it an “online catalog” (we’re not even going to talk about the asymmetry of the “Continue” button on this page), 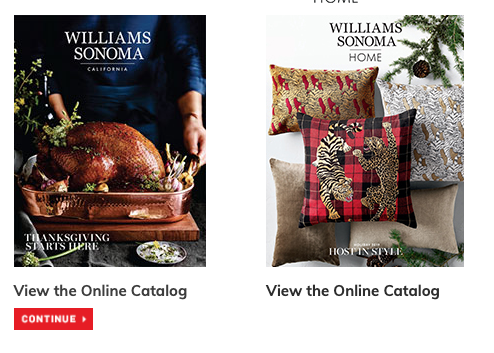 while the email calls it an “ecatalog” but also an “e-catalog”: 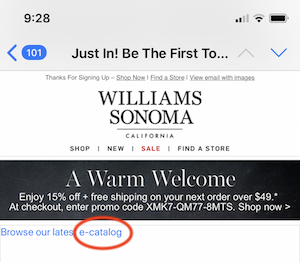 This email does have some good features—the custom photography, which clearly cost an arm and a leg, and the copy feels inviting and on-brand in its voice (although not personalizing is another miss). But if your user can’t get that far, it doesn’t help.

So it makes sense that when I went looking for who’s responsible for these egregious sins against current relationship marketing best practices, I came across this. It seems Williams Sonoma has realized there’s a problem and is working to correct it. Kudos for that. 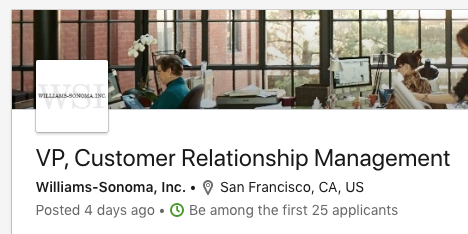