I wrote a book.

Fun fact about me: I ran a cooking school for eight years. Ever since we closed in 2009, I’ve been trying to write about the experience. I’m a writer, right? I should be able to write about something I personally did. It’s not like I have to invent characters or a plot. It’s not as if I don’t know how the story ends. 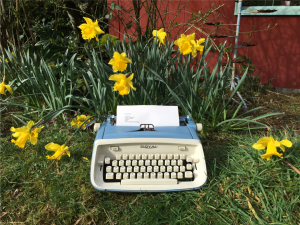 But, for seven years, writing that experience down was impossible for me. I’d write a page, or twenty pages, or twelve chapters, and then I’d get mired down and I’d start editing it. I’d go back and tinker with this or that and pretty soon, the work would be stalled completely.

Last year, when I launched myself as a freelance copywriter, I bought a 1968 Royal Aristocrat typewriter. And I had a thought: On a manual typewriter, there is no editing. There’s no going backward, only going forward.

By that time, my inability to write about my experiences with the cooking school was driving me crazy. I had other things I wanted to write—novels, poetry, a children’s story—but this book seemed to be plugging the pipes. So, I thought, I’ll give it a go on the typewriter. That way I can only write it down and to hell with what it says. If it’s awful, so be it: it’ll be awful and done.

It took me a year, writing two or three pages a night, a couple nights a week on average. I switched typewriters, because pounding the keys of a manual takes a lot of energy, but I chose my “new” machine, an IBM Selectric II, for its lack of correction features. (And because it was the machine of choice of Hank Moody, the appropriately-named writer of Californication.) It went in fits and starts. One day I sat down and wrote 40 pages; for almost three months, I didn’t write at all, and my husband threatened to sell the typewriter (he was kidding, and, in my defense, it was uncomfortable to sit at the typewriter because I’d just broken myself). But I kept doing it, a little bit at a time. And guess what happened?